Nigeria and its Fuel Subsidy Crisis

Want to help Africa? Do business here was the TED rallying cry by former World Bank MD now Nigeria Finance minister Ngozi Okonjo-Iweala. But, who is going to do business with you if you appeared clueless in the face of the future? Spearheading the controversial plan to scrap fuel subsidies was a mistake as anger sparked unrest forcing banks, petrol stations, manufacturing companies and Nigerian airports to close. President Goodluck Jonathan has gone on national TV to defend the fuel cuts. But words like "I have no intention to inflict pains on Nigerians" and "We must act in the public interest, no matter how tough, for the pains of today cannot be compared to the benefits of tomorrow" missed the point.
Petrol prices in Nigeria are currently very low by international standards at about $0.40 per litre. Many Nigerians regard cheap fuel as the only benefit they get from the nation's oil wealth. There are compelling arguments for the removal of fuel subsidy, however, the government could have executed it better. The town hall meeting was a disaster of jargon and platitudes. The announcement to remove fuel subsidy was made in a statement from regulators, which said the changes would begin immediately. Petrol prices more than doubled overnight in response and angry street protests followed.
This non-progressive and socially unjust tax has led to chaos in every sector. It was poorly planned and executed hence the angry protests that are threatening other areas like security as we learn that sympathisers of the Islamist Boko Haram group are in government and security agencies. “Downside scenarios included: Nigeria as a failed state, dragging down a large part of the West African region.” Is the game over for Nigeria as people sit at home while their elected representatives take home pay is more than that of US President Obama?
I do not think so. All is not lost in Nigeria, those incompetent lot in the Nigerian government have to do the difficult task of leadership. A U-turn. Admit error and blame God. Rather than tax poor Nigerians. Now, how about taxing those that benefit from Nigeria? A one-off $100Billion 2012 pollution and corruption tax on all multi-nationals will deliver on the economic benefits as we re-plan the removal of petroleum subsidy. Shell, Chevron, P&G, PwC and others have turned around Trillions in US dollars out of Nigeria. Is it wrong to now ask them to share in the benefits of tomorrow?
10 comments:

Nigerian Elections - Who to vote

In The News For The Wrong Reasons

Who wants to live to 100years when he is almost dead at 50? As we celebrate mediocre and continue a pigsty existence in a cosmos of many billion planets. Perhaps a reflection on our kidnapped children in Abia, our sex slaves in Mali, our dead in Jos mayhem, on death trap roads, preventable diseases and others brought on by effects of extreme poverty. All of this in the midst of plenty.
The root causes of most ills in our country today is corruption by those claiming today as a day of celebration. The illusion that we won independence is a good starting point. So, Obafemi Awolowo, Nnamdi Azikiwe and Ahmadu Bello (note, no titles) were idiots according to General Obasnjo (note title) on “Nigeria@50 What celebrations?”. But look who is doing the talking. The independence deception has created a corruption that killed our society. Why else would those who could leave?
Celebrating independence in a zombie nation is not going to get us to where we should be. The colourful flowing gowns ought to make room for sombre and simple attaire ready for work. Our over fed VIPs have failed us over many decades yet we continue to look the other way as they celebrate mediocre. Cheering them on rather than booing them off the stage. The rest of Africa does not fare well as Zuma leads South Africa but to those Nigerians that are yet to see the movie D-9, go figure.
10 comments:

Next News Nigeria - What a joy!

"Bankole shuns official residence" could easily have been dissmissed as a none starter but the end of the story revealed "a house adjacent to Mr Bankole’s private residence, which he rented for some members of his family, was attacked by armed robbers, who invaded it at about 4am". So we should care that the current Speaker lives out of his official residence but wait, "Work on the two residences began in 2007 when the former Speaker, Patricia Etteh, and the management of the National Assembly awarded the contracts for N628 million". Again, one of those inflated contracts that is keeping 90 million Nigerians in poverty while the UN speaks about MDGs. A highly recommended story as more hundreds of millions of cash are bandied about in a story that give a general picture of home.
It gets worse, “In July 2006, my wife suddenly had a stroke... “I could not take her to the hospital because there was no dime with me.” Mr Egein could eventually get his wife to the hospital six hours later, after his church pastor raised some money for him. However, the money could only cover part of the initial cost of his wife’s treatment. Subsequently, she was outside the hospital’s care three days later. Again, Mr Egein could not raise more money for a longer stay that would lead to increased observation and more treatment. “We felt that if we continue to keep her there, we will not be able to shoulder the bill. So we asked the hospital authority to release her to us. ” Mrs Egein, 37, died three months after.
This Banking, Healthcare and The Pastor story is about thinking, asking and acting on the failures, missed chances, inadequate care and non existent emergency services that might have saved Mrs Egein´s life. Now join it up with the Dimeji Bankole, speaker, House of Representatives story. How honorable? "...But now, most Nigerians are hypocrites, they see somebody doing something wrong, they laugh with him, they celebrate him, he doesn’t know that he is doing something wrong" - Justice Emmanuel Olayinka Ayoola.
“Why should parents/guardians allow their children/wards take to the streets? A story of hope and a few good people performing daily miracles is an encouragement that all is not lost. Chief Michael Iso and many others are doing their best in a bad environment, what is stopping the state and federal governments? Least we forget, its corruption, stupid.
4 comments:

"My initial reaction when I heard of Ibori's arrest was that of excitement, and surprise too. Surprise because somebody said he had gone to Ghana. Some people also said he is still somewhere in Delta, some say in his village in Warri. My mind never went to Dubai". Chair of the Economic and Financial Crimes Commission - Mrs. Farida Waziri

Clueless or what? In 2007, a UK court froze assets worth $35m allegedly belonging to Chief James Ibori (annual salary less $25,000), the former governor of oil-rich Delta state is accused of stealing funds worth $290m by Nigeria's EFCC anti-corruption agency. The same man is connected to the Nigerian power house and Tory MP Tony Baldry whose involvement in this matter has not been as a Member of Parliament, but as a barrister. More on two faced Tony Baldry MP, Conservative member for Banbury here.

Mrs Waziri and others appear hapless chasing cockroaches and rats in the midst of plenty. Hounding our petty thieves is perhaps a crime in itself as the big deal slips through the net, with thanks to the smoke screen provided by our daft media. General Obasanjo came and went but his corrupt practices legacy remained as General Babangida seeks to return. So, our houseboy returns fire with the Nigeria, China Sign $23 Billion Oil-Refinery Big Deal. Who is fooling who as China National Petroleum Corp., China's largest oil company by assets, said it had no information on Nigeria's announcement?

Why do you think Ibrahim Babangida must never rule Nigeria again?

Nigeria, What´s Wrong With This Picture? 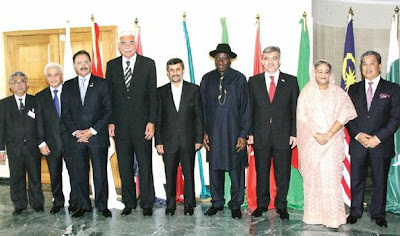 Nigeria And A Silent Danger

They killed my daughter and my son is truly horrific as the world ponders the recuring brutal massacres around Nigeria's Middle Belt which is largely attributed to Muslims and Christians. However, the bigger killer remains silent and many more are in real danger. Never mind the lawlessness on a grand scale from top down government, this cycle of violence was left to ferment and it is not going to be over quickly. The struggle between ethnic groups for fertile land and resources in the region is not new in an area with a history of tin and columbite mining as abandoned mines mark the landscape. Vicious fights for the scraps of state patronage has corruption coming back full circle as huge sums of cash allocated to land rehabilitation simply disappeared.
In the surrounding countryside, abandoned mining equipment and rain-filled quarries litter a barren land, where waste dumps and gully erosion render much of the land unusable for farming. Nigeria has lost 285,000 sq km of land, nearly a third of its total 924,000 sq km territory, to various forms of soil degradation, according to official statistics. The culprit is a phenomenon called 'gully erosion'. Mainly a product of human activities such as deforestation, unsustainable farming practices, path and road construction, and poorly constructed drainage systems, gully erosion takes place when wear-and-tear on the surface land causes rainwater to accumulate in one area, causing loss of vegetation cover, localized erosion, and the formation of gullies.
2 comments: